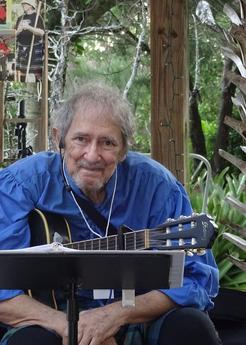 Mac Perry was born on May 18, 1940 and died October 7, 2016 after a long and courageous battle with multiple myeloma. He will be deeply missed by family, friends, and those who have been touched by his music, art, writing, interest in archeology, and knowledge about horticulture and regional history.

Mac grew up in Norfolk, VA and joined the U.S. Navy after graduating from high school. He was a percussionist in the U.S. Navy Band and served with the Admiral's Fleet on the U.S.S. Forrestal for four years. While serving in the Navy, Mac married Linda Faye Wilson, also of Norfolk. Following Naval service, Mac spent two years at Old Dominion College before transferring to Virginia Tech where he earned a B.S. Degree in Horticulture. After graduation Mac and Faye moved to Seminole, FL where Mac served as a County Agent in horticulture.

As they made new friends, Mac joined a Christian choral group, started his family, earned a Master's Degree in Religious Education, began his writing career, and started a lawn pest control business.

​Mac's passion for music and love for the vibraphone, guitar, and Indian flutes lasted throughout his life. His interest in painting started during his undergraduate years and continued until his death. Mac's creative talents and diversified interests were gifts to many, and he won awards for his contributions in art and music. His paintings are cherished by residents of the East Coast, Midwest and beyond. Mac published sixteen books on topics in religion, landscaping, regional history, archeological discovery, music, food, and he also wrote historical fiction. During mid-career he was awarded an honorary Ph.D. in Literature.
y Times on Oct. 16, 2016​

His commitment to, and excitement about, regional history and native people arose from the discovery that their home was built over an Indian Mound and their neighborhood over the remains of an Indian village. Eager to share his research and knowledge, Mac built a replica Indian village in the front yard of their home to display how Indian inhabitants lived. The display included many tools used in daily life. Mac found great joy in providing tours of this outdoor museum.

The family feels deep gratitude for the exceptional medical care, love and compassion shown Mac, family, and friends by the medical and nursing staff of the Moffitt Cancer Center and the Suncoast Hospice Care Center in Pinellas Park.

In lieu of flowers contributions to Suncoast Hospice Care Center in Pinellas Park in Mac's honor would be greatly appreciated. A Celebration of Life will be held at a later date.

Published in the Tampa Bay Times

Mac Perry was our 2nd

Bard of the Celts.

He was a master musician, one of his many talents.

Most of all he was a kind & loving man.  He will be greatly missed by all, especially his beautiful Wife, Faye.